If you are striving for excellence when do you need a coach?  Is it when you fail or is it when outcomes do not meet your expectations? As you strive for excellence what do you expect of a coach?  Coaching is a word that takes on many different forms.

For example, you may want career excellence so you may be looking for a career coach.  Perhaps your world view has created frustration and you are looking for balance and focus in your life so you could be in need of a life coach.  Lastly there are the various types of coaches that physically train you, preparing to deliver excellence during a specific drill or game.  In this case you would engage an athletic coach.  Whatever your coaching needs may be, are there standards for coaching that would be applied to any application you desire?

Far too often the mindset of an athletic coach is for the athlete to be seen and not heard.  The more demanding coaches may ask for total unaltering acceptance for anything the coach says.  Movies are produced about these nasty coaches.  For example, one of my favorite movie is the Karate Kid.  This is a great story about good coach overcoming the bad coach.  Mr. Miyagi and his student Daniel’s fight to do what is right in the presence of others who do not believe in doing what is right.

By doing what is right Mr. Miyagi provided Daniel with confidence followed by training that improved his skills.  As Daniel proved he had talent and that he was more than capable his confidence was not limited to competing just in a Karate tournament.  He worked for Mr. Miyagi he helped his mom and was confident enough to make new friends; each of these behaviors were not part of Daniel’s behavior before meeting his coach Mr. Miyagi.

So, what are the fundamental training methods the “good coaches” use to bring players from average to excellence?  Here are some points to consider.

These four points have focus and are meant to create a foundation for building trust lasting relations with players and students.  With foundation coaches may adapt and adjust their methods to the demands their sport and the competition may present.  Pick a sport and then pick the best coach you may know of in that sport and then compare the coaches.

I think you will find that each coach, regardless of their sport, have each of these four foundational points as parts that define their success.  As I state this, I believe it is time to define success as a coach.  It is very simply stated but more difficult to apply.  “Success is not found on the scoreboard.  Success is found in the preparation, process and practice delivered before each competition.”  Coaches who practice these four points and make connections between each consistently deliver players that not only excel but create bonds that deliver championships. 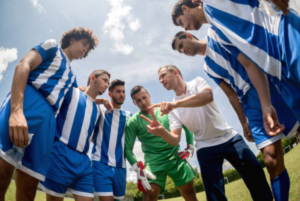 So, if these four foundational coaching standards support player excellence and with strong bonds between players teams deliver championships how is this excellence sustained?  Now that is a great question.  It is possibly a questioned that does not have one answer and most likely whatever the answer is it is not simply stated.  As I state this, I ask you to remember the definition of insanity is “doing the same thing over and over again expecting different results”.  Now, you should also know there are some insane coaches.

Too often I have seen coaches and as a coach asked players “do that again!”, “ok I think you can do that better, try it again”, “we are not getting this done, do it again”, thankfully I discovered the four standards I have shared giving me a release from insanity and the chance to know the true meaning of how to adapt and adjust as challenges present themselves.

One of the connections between each of the four standards is awareness.  Being aware of who or whom is with you as well as who or whom is challenging you.  Part of this awareness is called scouting.  Watching your competitors before you compete is not always something coaches feel is beneficial.  I can tell you an essential level of awareness is with your players.  For example, being an empathic listener provides coaches opportunity to discover where and how do players connect with teammates.  When you watch coaches during games watch how they behave before they substitute players, when they substitute and how they behave as players come back to the sidelines.  The decision making and timing that coaches demonstrate when substituting players are great indicators for how connected coaches are to their players’ skills.

So, consistently sustaining excellence requires coaches to be AWARE  and ready to connect players based on this awareness.  When this happens fans will see players intersect on a deep post route, a great back door finish, or a smooth forceful 4-6-3 double play game after game.  I regret that many coaches are not humble enough to realize what these four coaching standards are and how to connect players for sustained excellence.

Remember I am talking about sustained excellence not perfection.  Excellence sounds great but there is no guarantee that players or the team will always deliver excellence, that would be insane to expect that.  What is not insane is striving for excellence by accepting failure and always trying to improve on your imperfections.

So, coaches who consistently deliver excellence from their players, team performance or just their own actions recognize the role error and failure plays in defining future success.  They know that humbly accepting failure as a tool for creating excellence defines a path for future success.  As you consider being a coach; whatever type of coach that may be, consider the four foundational standards provided here knowing that you will fail during your journey.

Do not be dismayed.  Your error and failures are chapters and verse for you to study as you discover a sustainable path to excellence.